From JapanRealEstateWiki
Jump to navigation Jump to search

It shows the asking square meter price of an average 20 year old apartment in the 4 most central wards of Tokyo: Minato-ku, Shibuya-ku, Chiyoda-ku and Chuo-ku. It is updated several times a week and corrected for the age of the units on the market. It is not corrected for inflation.

To get the updated time series for this chart click here. I will take a minute or two to generate.

In Japan there is no central registry of real estate transactions and as such the transaction prices are only sporadically known. There are however several websites listing properties on the market. For central Tokyo these data sources are comprehensive and the data set is rather reliable. Given that the discount on the asking price is fairly constant at about 5% of the lowest listed price it makes sense to use the largest and most reliable data-set in Tokyo to calculate the trends in property prices.

Listings with prices that are extremely outside the norm are automatically removed from the sample. Points with a square meter price more than 5 times higher or less than 5 times lower than average for their age are discarded.

The average age of an apartment in Tokyo is not constant. The amount of construction fluctuates and as a result during boom times more new apartments come on the market than usual

In the above chart you can see that the average age of an apartment for sale has slowly declined from 2005 and only started rising recently.

As shown below on average new apartments are around 2 1/2 times more expensive than 30 year old ones. During boom times the average price of an apartment increases much more due to the newer units on the market.

Comparison of the ARE Index with the Land Institute of Japan

Every month the Land Institute of Japan brings out a report on Japanese real estate prices. In that report they publish the average square meter prices for "Existing Condominium Sales in Tokyo Metropolitan Area".

The differences between those numbers and the ARE Index are: 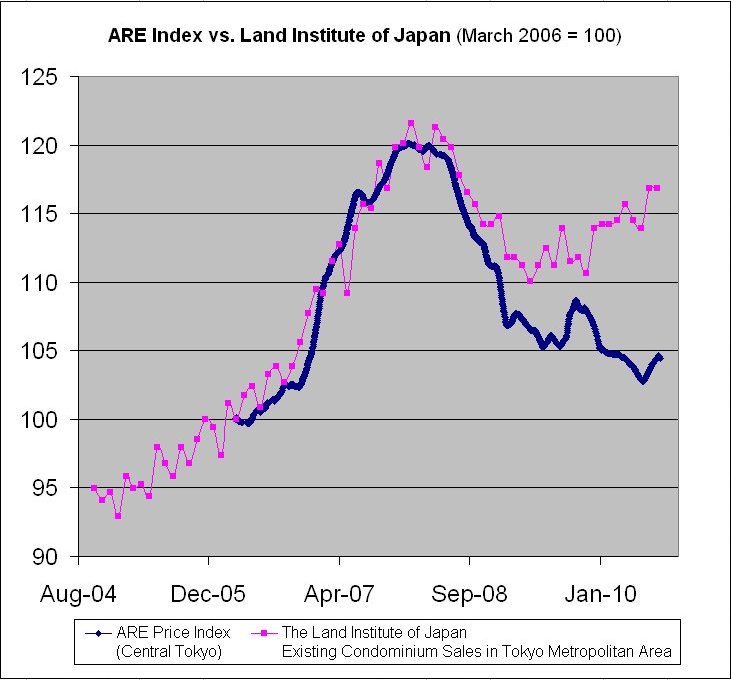 From the chart it is clear the two indexes reported similar gains in 2006 and 2007. Even though the Land Institute over-reported the price increases in all of Tokyo, the overall numbers are comparable as the sub-urban areas did not increase so much. But around 2008 the indexes started to diverge. While the sub-urban areas were not so affected by the financial crisis, central Tokyo prices declined rapidly. At the same time the average age of the apartments stabilized as new construction was halted. Given that the Land Institute includes the sub-urban areas the difference between the two indexes became pronounced.

Even with their differences both numbers though however are superior indicators compared to the Land Price statistics that are commonly reported internationally.

This is a transaction price-based investment index using a hedonic regression. Factors considered in the RRPI calculation:

The resulting numbers seem reasonably correct. Compared to the ARE Index there is about a 3-4 month lag, clearly noticeable after the March 11 Earthquake. This index covers all of Tokyo so the price decline in 2011 is not as great as reported in the ARE Index, which covers just the central wards. 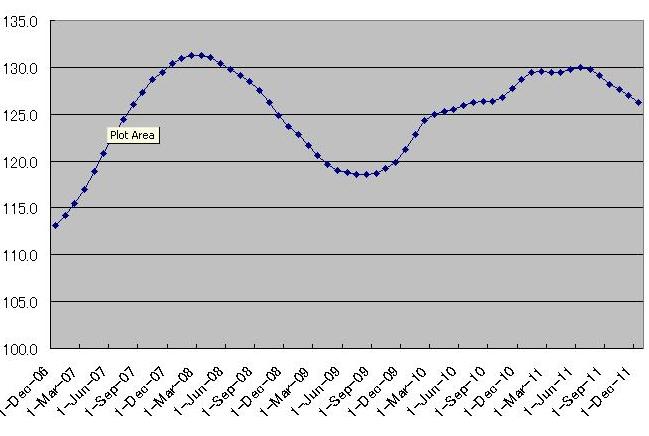